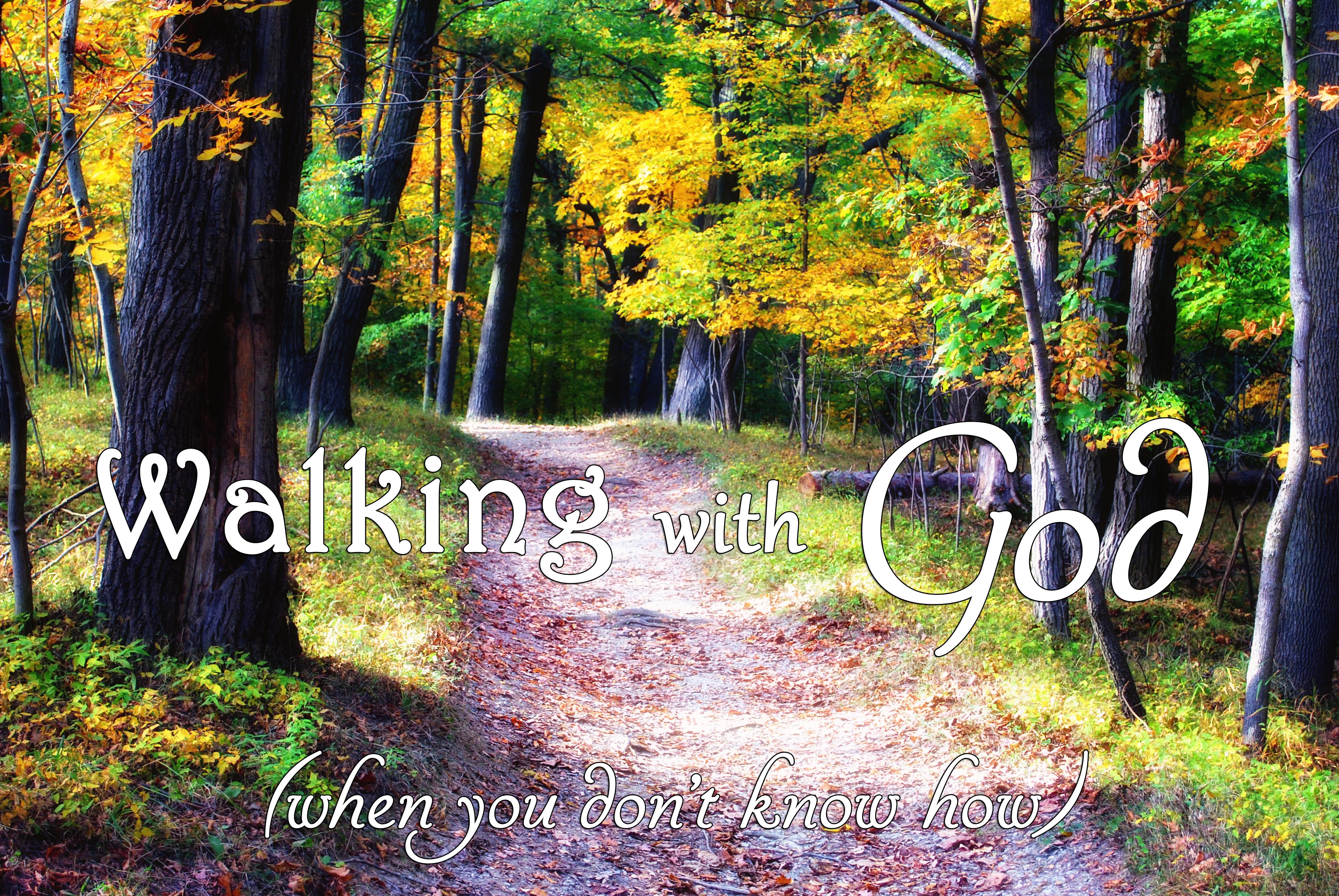 How many times have you heard your pastor talk about walking with God? Once? Twice? A million times? Everyone agrees this is THE pursuit of any Disciple. On one hand, it’s Christianity 101. Something so elementary to the Christian life we assume everyone understands exactly what it means and what it looks like. But that’s not at all true.

I remember being in the audience of a Christian gathering where there was a Q&A panel on stage. The audience was invited to text in their no-holds-barred questions about anything at all relating to Christianity and the Christian life. The host would read the questions as they came in and those on the panel would offer their best answers.

There were questions about divorce, tithing, and a number of other questions relating to living the Christian life. The panel did a very good job providing insightful answers.

Until, that is, someone texted in this question: “What does it mean to walk with God and how do I know if I’m doing it?”. The panel shifted uncomfortably as they did their best to articulate a helpful answer.

“Brother, you just need to pray every day. Talk to Him.”

“You really need to spend time in the Word.”

In came another question via text:

“I appreciate your answers, but I do those things and still don’t feel like I understand. Can you explain it a little more?”

Sadly, no better answer was available. The pastor assured the audience that as long as they were praying and reading the Bible, they were walking with God.

[pullquote class=left]Lots of people read their Bible and pray but don’t feel any dynamic connection to God. [/pullquote]

There is a reason that answer is so dissatisfying. Lots of people read their Bible and pray but don’t feel any dynamic connection to God. They don’t feel God with them. They are left feeling there is something deeper and more life giving they are missing out on.

Who hasn’t felt that way before?

Several hundred years ago there was a man known as Brother Lawrence who lived in the Discalced Carmelite monastery in Paris in the 17th Century. Like us, he longed to feel close to God. He longed to know his life was in step with the One he followed.

Like us, he longed to remove every obstacle that stood in the way of experiencing intimacy with God. Ultimately this was his motive for entering the monastery.

Most would never go to such extremes, but I think we can all relate to his struggle in our own way.

How many times have you pushed the reset button in your efforts to lead a more spiritually rich and disciplined life?

How many times have you committed to start every day in prayer only to see prayer pushed out of your busy morning routine?

How many times have you signed up to ‘Read the Bible in one Year’ at your church only to start falling behind mid-March…and then given up by May?

It’s discouraging. And it can leave you feeling a bit spiritually dead inside.

One cold day in winter, Brother Lawrence found himself staring at a barren tree. Though he knew it was still alive, the tree looked dead with its branches outstretched and completely bare. Yet, there it stood, very much alive, waiting patiently for the sure hope that new leaves and abundant fruit would come with the change of seasons.

Pondering this, Brother Lawrence grasped, for the first time, the extravagance of God’s grace and the unfailing power of His presence and provision in every season of our lives.

You see, he felt very much like the tree. He knew he was alive but felt dead and useless. In his present season it seemed he had nothing to offer that could please God. Yet staring at that tree he understood God could bring new life to him. In God’s infinite grace there would be another season.  Even in this fallow time, God was still there.

It wasn’t one of those storybook visions where the clouds opened, and heavenly rays of light shone down on the tree. There was no voice on high, but he did experience God… in every cell of his being. Brother Lawrence said that leafless tree “first flashed in upon my soul the fact of God, and a love for God that never after ceased to burn.”

“I regard myself as the most wretched of all men, stinking and covered with sores, and as one who has committed all sorts of crimes against his King. Overcome by remorse, I confess all my wickedness to Him, ask His pardon and abandon myself entirely to Him to do with as He will. But this King, filled with goodness and mercy, far from chastising me, lovingly embraces me, makes me eat at His table, serves me with His own hands, gives me the keys of His treasures and treats me as His favorite. He talks with me and is delighted with me in a thousand and one ways; He forgives me and relieves me of my principle bad habits without talking about them; I beg Him to make me according to His heart and always the more weak and despicable I see myself to be, the more beloved I am of God.”
― Brother Lawrence, The Practice of the Presence of God

God was always there.

He determined from that day forward  he wouldn’t seek communion with God as a separate activity from his daily work. He would see God and Praise God through his every task and thought.

He praised God for sustaining the tree through the winter.

He thanked Him when the ground brought forth fresh vegetables.

He praised God for his strength and good health as he labored through a difficult task.

When he peeled potatoes in the kitchen in service to the monks, he saw God’s grace and provision and thanked Him for it.

He thanked Him both for the potatoes and the physical ability to peel them.

When he washed the dishes, he did so as an act of worship to God.

He understood an Omnipresent God is always there. It would be disrespectful to not acknowledge Him simply because he was in a kitchen and not a church.

He understood an Omniscient God knows his heart and thoughts. To not acknowledge that was to pass up the greatest opportunities to engage in a dynamic conversation with the One he most longed to connect with.

He understood an All-Powerful God is in even the most minute details of his existence. To not give Him glory for every blessing reaped from His creation was a burden of disrespect he couldn’t bear.

Brother Lawrence called this, The practice of the presence of God.

Simply acknowledging that you are ALWAYS in the presence of God changes everything.

[pullquote]Simply acknowledging that you are ALWAYS in the presence of God changes everything.[/pullquote]

You don’t have to wait for your next prayer time or hour of devotion to connect with God. He’s ready the moment you are.

I remember watching a dear old man polishing the wood on the altar and placing the candles for service. At first, I thought he was talking to himself. When I got closer I realized he was talking to God! The whole while he worked he praised God and acknowledged His presence in every moment.

“Isn’t this beautiful, Lord?” “Praise You, Jesus!” “Thank you for these beautiful flowers, Father!”

It was obvious serving God was something he greatly delighted in. But even more sweet was that he knew she wasn’t working alone. God’s presence was with him. He experienced it simply by acknowledging it.

Do you want to walk with God? This is the way.

The Practice of the Presence of God is to teach yourself to stay conscious of God’s nearness to you.

You might find it difficult at first. That’s okay. It’s human nature to focus on a strictly human level.

Take it from Brother Lawrence:

“Do not be discouraged by the resistance you will encounter from your human nature; you must go against your human inclinations. Often, in the beginning, you will think that you are wasting time, but you must go on, be determined and persevere in it until death, despite all the difficulties.”
― Brother Lawrence, The Practice of the Presence of God

He’s already with you. Just begin by acknowledging that one simple fact. Then discover the joy of continuously engaging with the One who loves you more than anyone else ever could.

This is what it’s like to walk with God.

I highly recommend you read The Practice of the Presence of God. Brother Lawrence has so much more to share with you!

Is It Time To Fight Fire With Fire?
“Well, obviously they aren’t a REAL Christian”