How We Get Suckered into Being Bigots

How We Get Suckered into Being Bigots 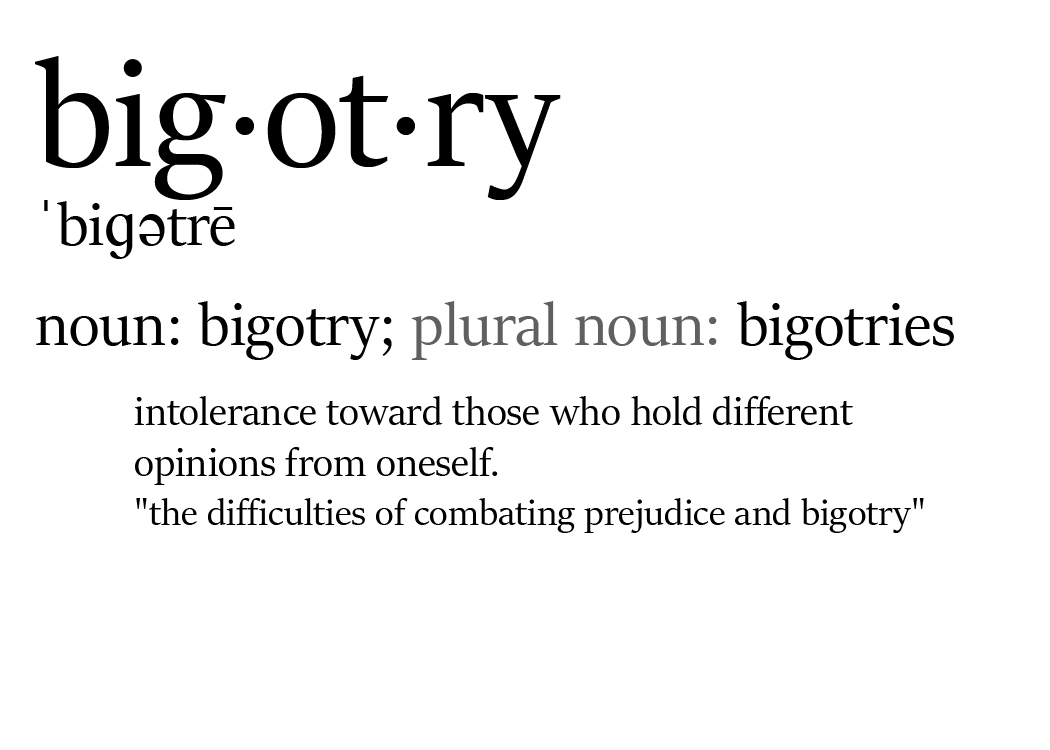 Our nation is crawling with bigots who pompously rail against Christians. As a group we are considered hostile hypocrites and ridiculous fanatics who base our lives on a fantasy. We are viewed as irrelevant antagonists who threaten the freedoms of the American people.

Our nation is crawling with bigots who blame all Muslims for the atrocities committed by an insane group of extremists who have used their religious tenets to brutalize and murder innocents among their own people as well as ours. (And yes, I do see the implicit bigotry of taking a stand against the group known as ISIS.)

Our nation is crawling with bigots who disparage the character and morality of everyone outside their own political affiliation. This is the most tiresome of all if you ask me. Did you know that how you voted in the last presidential election determines whether or not you are a decent and moral person with a conscience and concern for God and your fellow man? Hogwash!

Our nation is crawling with bigots who malign the police and accuse them of being an organization of racists who murder black people for sport. This may be the most insidious and dangerous falsehood of them all.

This week, another unarmed black man was shot dead by one of several guns pointed at him by officers who serve the public of Tulsa, Oklahoma. Another unbearable loss caught on tape.

Thanks to the technology we have at our fingertips, news of the shooting flew nearly as fast as the bullet that killed Mr. Terence Crutcher.

Just as fast was the insinuation that the shooting was racially motivated.

Ever since the media began to exploit the news of black men shot by police I have avoided the public fray. I have not changed my Facebook profile picture to the black square with a blue line, though I maintain my faith in the overall integrity of our police department. I also stood up for the Black Lives Matter movement when it first began.

In the beginning, back when Michael Brown was shot to death by a white officer in Ferguson Missouri, I resonated with the outrage of a what seemed an unjustified shooting death of an unarmed, innocent man. Because of the “news” I even bought into the notion that the color of his skin had a lot to do with why the police action turned deadly.

Over time, and several media frenzies later, my views have changed somewhat. I’m still just as outraged and disgusted by racism as I’ve always been, but I feel the battle ground has shifted beneath our feet.

I have come to view the media narrative as a calculated attempt to deepen the divisions between blacks, whites, citizens and police. Why? Bigotry sells. Bigotry garners votes. When one group becomes a public affront to another it is food for the insatiable and irrepressible beasts we know as the Media, and their evil twin, Politics. By stoking our fears and the fires of bigotry, these two beasts ensure an endless supply of protests on parade.

A screaming, outraged, grieving citizenry on the verge of rebellion feeds on itself and ignites the most ignoble characteristics of the public psyche.

Why do I believe this? Because the overwhelming majority of the stories that spark such outrage lack integrity and balance in their reporting. They intentionally underreport relevant facts that would guide us toward more rational and critical thinking …and because the fire starters don’t benefit when they tell the whole truth. They deliberately ignore any fact that undermines their respective agendas.

I watched a video made by a black woman named Peggy Hubbard  Ms. Hubbard very plainly and rationally called out those who were marching and rioting in the streets over the death of another “thug” who was “resisting arrest” while they all completely ignored the death of a nine year old black girl who was shot dead in her bedroom by a stray bullet during a drive by shooting in her neighborhood. She goes on to speak out against black brutality and the mindset of people who claim black lives matter but do nothing to stem the tide of black on black crime. She speaks in defense of the police who risk their lives every day who are constantly at risk of being killed in the line of duty by thugs who have no intention of abiding by the laws of the land.

Here we are again. This week’s shooting of Mr.Terence Crutcher has served to ratchet up the public angst around racism when the real problem is our commitment to the bigotry we buy into.

We must be willing to see more than what the media wants us to see. If you watched the video footage of Mr. Crutcher’s horrible death, you also saw Mr. Crutcher walk to his vehicle with police following behind him, with a gun, commanding him to stop.

Obeying the commands of police is the law, and for good reasons.

The minute Crutcher demonstrated that he had no intention of obeying the officer’s commands he made the situation gravely dangerous. When he reached toward the door of his car FOR ANYTHING the police had to assume he was reaching for a gun to shoot THEM. This is what all police of every color are trained to do.

While we don’t know what exchange the police had with the man that led up to that moment, at that moment there was no other choice.

To the police officer who knows he or she wears a target on their chest, moments like these are understandably seen as kill or be killed. How can we blame them for that?

The one arguable point for me is that she used her gun instead of her stun gun. But was it because the man was black? Doubtfully. We’d have to know more about the officer before we could possibly conclude she is racist. Yet, the media already has.

Do you believe for even one minute that racism in the police department is SOOOO rampant that in any random city in America, any random 3-5 police officers responding to a call are in cahoots with one another and just itching to gun down another black man while their dash cameras or body cameras or the helicopter above record the entire event? Do you really believe their hatred of black people is so perverse they would brazenly throw their lives into the maelstrom of outrage that will automatically put them on suspension and possibly end their careers or land them in prison? I don’t. The more the police are maligned in the public eye, the LESS possible this seems to me.

724 Officers have been killed in the line of duty since 2010. The threat that a routine traffic stop can end in their death is real. Dealing with people who are physically stronger than you because of their size or the drugs they may be on, make weapons the only measure our police officers have to maintain control of the situation. When even a loaded pistol pointed at a someone refusing the commands of the officer isn’t enough to bring things under immediate control I imagine the police read the situation as one that is about to turn against them. They swore to serve and protect. They did not swear to die on the off chance that the person refusing their commands and reaching into their car meant no harm.

YES, let’s be outraged that racism still exists in the world. YES, LET’S grieve over the loss of another human being in a police involved shooting. But don’t doubt for a moment those officers are grieving too.

Let’s be reasonable. Consider all of the facts. Not just those that support the narrative the media and politicians put forward to further an agenda that depends on us believing the police are racists and black men are being gunned down in cold blood.

Though there have been cases when a truly innocent black man was the victim of wrongful death, the majority of the cases in the media SHOW that deadly force was used after the suspect resisted arrest, was aggressive with police or did something that created a kill or be killed situation for all involved.

Christian, the Bible has a lot to say about how we are to submit to laws and the authorities. Please consider how differently the vast majority of the high profile stories would have turned out if those involved had done so.

Let’s root out racism wherever it exists, especially in the police department. But let’s not take part in maligning an entire group of honorable and brave men and women who risk their lives every single day…for us all. They deserve our respect, our cooperation and our support.

Obey your leaders and submit to them, for they are keeping watch over your souls, as those who will have to give an account. Let them do this with joy and not with groaning, for that would be of no advantage to you.

Remind them to be submissive to rulers and authorities, to be obedient, to be ready for every good work,

Let every person be subject to the governing authorities. For there is no authority except from God, and those that exist have been instituted by God.

May God rest the soul of Mr. Crutcher and may His wisdom lead us all to what is truly righteous…whatever that may be.

Four ways to know you are REALLY walking with Jesus
The Truth According to Whom?